After taking some time off in the holidays following our December release, here’s a fresh batch of Aether news. We have major updates on this one.

More wood behind the arrows

We’ve raised a small second round of investment to grow the team a little, bringing on Benedict as a co-founder. I’ve been collaborating with Benedict in different projects over the years, including Aether, and having him join us full-time will allow us to do things that were not possible because of the small size of the team.

If you’ve been following the world of the decentralised web and peer-to-peer (P2P) networks, you might have already heard of some of the things Benedict has worked on, such as Distributed Press, Toronto Mesh, and the Our Networks conference. He has also been one of the organisers of the DWeb Camp, held by the Internet Archive.

Considering that we’re both open-source hackers trying to create an honest, sustainable business to support what we believe to be a better Web, he is a good fit for our young community not only because he is a good engineer, but also because he fits very well with Aether’s ethos.

With him on board, we now can do quite a bit more that we did not have time for before, such as being better advocates for ideas behind Aether. While we expect our primary focus to be engineering work, we now have the capacity for all the other stuff that makes for a sustainable project. In any case, you will hear a lot more from us, and we will be publishing essays and shipping code on a more reliable schedule.

If you have been following us, you might have heard of Aether Pro, a secondary app Benedict and I have been working on over the past year. It is a hosted, server-based version of Aether for private communities and remote teams. Now that Pro is out of the ‘alpha’ phase, we will be merging Pro into Aether. This merge will add new features to Aether that we have been working on, such as private and invite-only communities, alongside the usual public ones backed by the peer-to-peer network. 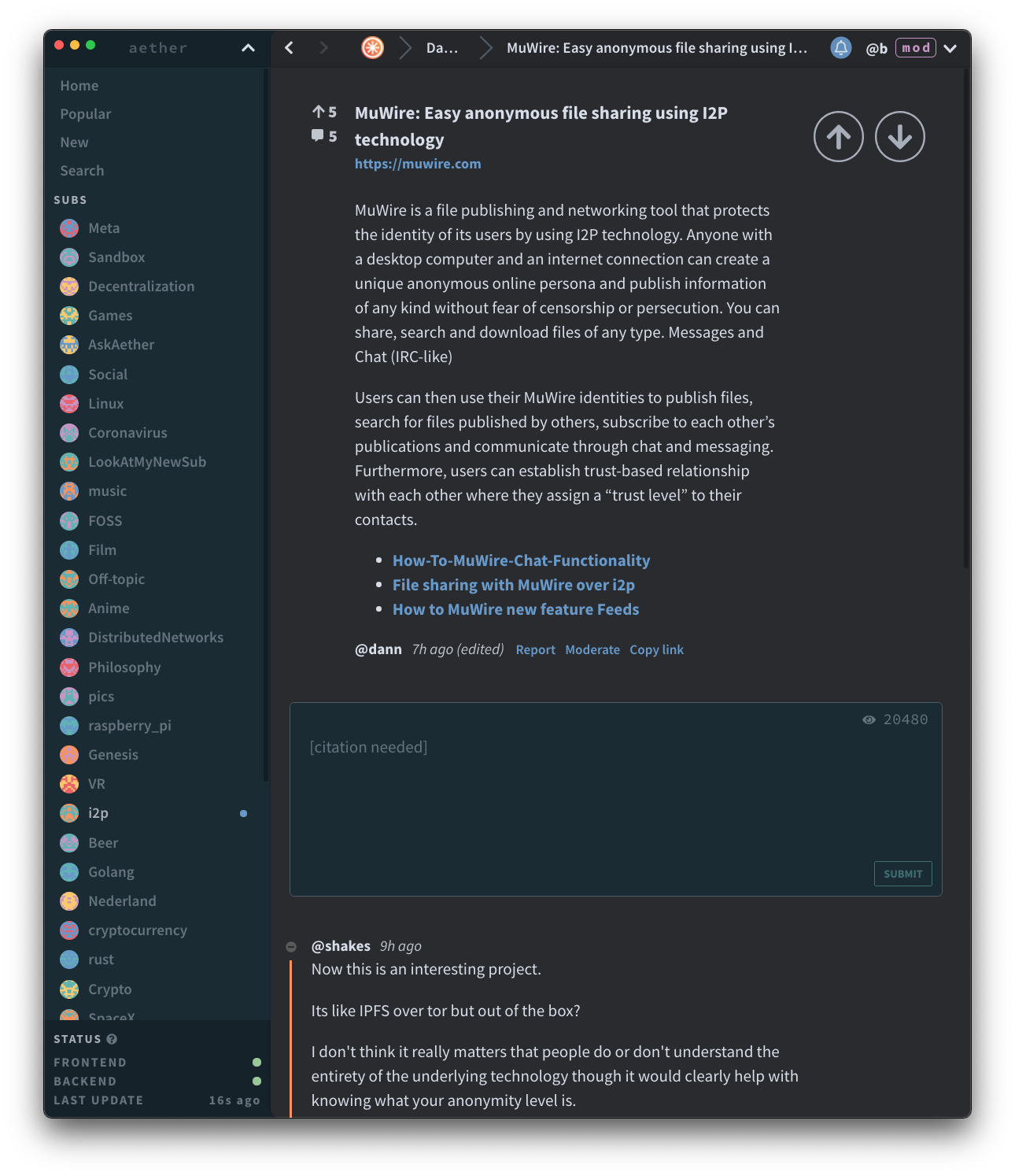 With the increasing pace of poorly thought-out decisions by mainstream platforms that amount to needless censorship, we have been getting requests for Aether to allow private and invite-only communities. This is a trend that is likely to continue for the foreseeable future as the definition of acceptable speech on the internet gets narrower and narrower.

Up until now, private Aether communities were not possible because all content had to be carried by users, but users have no incentive to store and transmit data that they cannot see. Creating a private community that is not readable to anyone except its members would task every user to carry data for them, and give back nothing in return. Given enough time, this would make people fork Aether, and that fork would be a version that does not carry private communities the user is not a member of. Moreover, that fork would objectively be a better app since it can do the same job while using fewer resources.

On the other hand, if there could be a separate service that is not a part of Aether P2P network that hosts these private communities, it would solve the issue by removing the need for the network to carry private data. That has been our motivation behind Aether Pro. And now that Pro is more mature, it is time to merge it back into the main Aether app to bring the expanded feature set from it, and to support the features we have been asked for by the community.

Since the primary features offered by the Pro (private, invite-only communities) need a server backing, we will be offering the hosted service under a freemium model. This means you will be able to create a private Aether for yourself and your friends for free.

We are planning to make the more business-oriented features paid to cover our costs and make Aether a sustainable project while we will make sure that for social and community use cases the free version is more than enough.

As for licensing, the primary app has been AGPL since the start, and it will remain so. Components of Aether Pro had been under a proprietary license and their source code private during development. We want to improve on this situation, and we are working on figuring out how to make this work.

Aether has always been a project borne out of a personal interest, and our philosophy has been, roughly, ‘less talk, more work’. In a world of unfulfilled promises by many crypto projects, Kickstarters and startups that promised the heavens and Earth and delivered empty boxes, Aether has always shipped quietly, a product that works in the real world instead of only in the minds of its creators, with the argument that good work would be its own marketing. 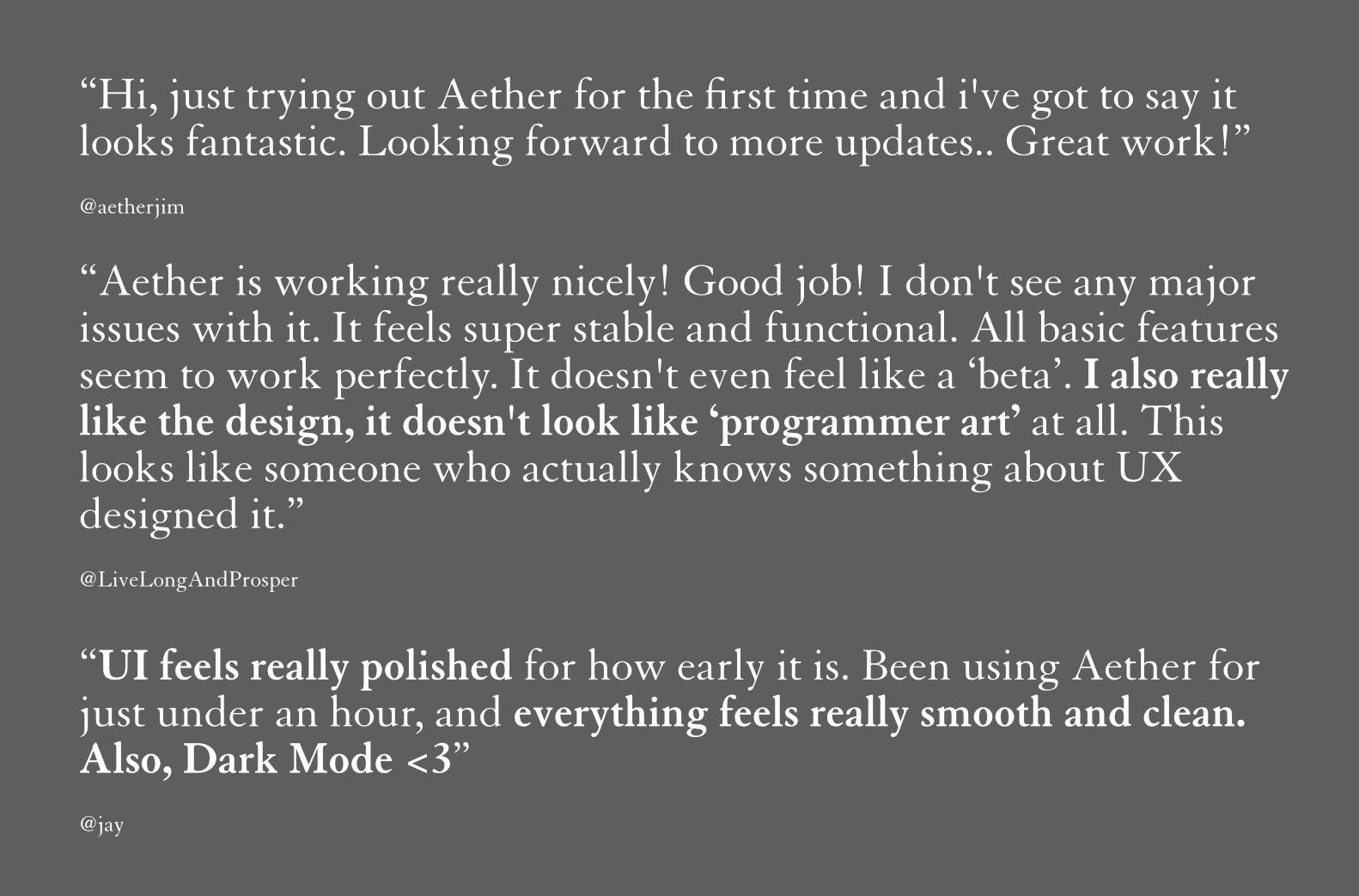 However, after some years of doing this, I have come to realise this is not an either/or case. Aether is one of the most reliable and consistently available products in the P2P space, but compared to others it remains relatively unknown. That, I think, is partly because I explicitly avoided ‘marketing’ it — the engineer in me always considered it a dirty word.

In the last few months, I have started to think that I did it a disservice by opting to produce code over talking about it to such a degree, even if it makes me feel better personally. Ultimately, the more we talk about Aether, the more people can benefit from it, not only because it’s free and open-source, but also to let people know that decentralised platforms aren’t abstract ideas with no implementation or poor user experiences, they’re real, polished products you can use today. We need to do this to increase the impact we have in a digital world increasingly mediated by a handful of centralized services. Building the product is not enough. Like the apocryphal story of the tree in the middle of a forest being hit by lightning without anyone around to hear it, a great project genuinely capable of improving the future of the Web that no one has heard of is of no value at all. Marketing is a force-multiplier, and it’s high time we started to focus on it a little more.

All that is to say, with Benedict on board, we now can make this a priority. You’ll be hearing from us a lot more. We want people to know that alternatives to mainstream platforms exist, and they don’t require signing up for abusive relationships with giant, multinational companies that see themselves above any jurisdiction. We want people to give Aether a shot, of course, since that is what we think works best, but, any decentralised platform you can pick over mainstream platforms, from Mastodon to Scuttlebutt, or younger projects like Pixelfed and Cabal, we would consider it a win. And for that, we’ll kindly ask you to help us get the word out.

In our upcoming updates, we will be talking about:

Expect updates every other week, and occasional essays from us in the future. Add us to your RSS feed, sign up to our self-hosted newsletter or join our Substack to stay in touch.